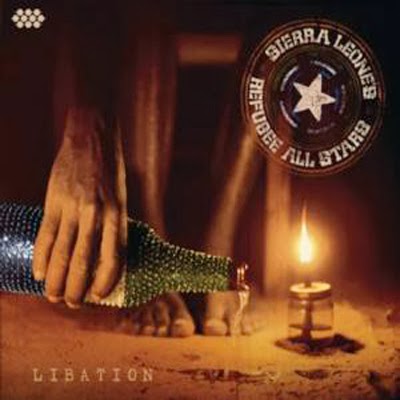 Sierra Leone's Refugee All Stars are truly a miracle success story. Emerging from a decade long adventure that saw them escape the hazards and squalor of refugee camps to wind up on the world's biggest stages, this group of inspired musicians illustrate the triumph of freewill. A decade in and the band continue to amaze and their latest album Libation is probably their best yet.

An honest, fun, yet aware album Libation is a celebration of their adventure and a respect of where it's taken them. Filled with passion, addictively catchy rhythms, African influences and a modern feel that sounds fantastic, Sierra Leone's Refugee All Stars seemingly are able to overcome any obstacle placed in their way. While the band obviously has a social consciousness about them, it's not all seriousness throughout Libation. In fact, the band managed to slip in a few endearing pop flavored songs that touch on love, intimacy, and being jaded within a relationship. These lighthearted moments are almost humanely unifying in the sense that they reflect that despite all that they've gone through they still have the same problems that we all have with love, relationships, and our other halves. No matter where you go...failed relationships happen.

The Refugees have created an album that celebrates the 10th anniversary of the making of their first album in fine style. As they say within the liner notes, they've lived a life that once seemed unimaginable and through it all have shared their music and passion with thousands of friends and fans. And while they've become successful they've not forgotten their roots and Libation reflects that with traditional African rhythms, instrumentation and stories of struggle. It's a fine celebration indeed and it's an overwhelming display of pride on behalf of the band of where they come from and where they're headed.
Posted by Paul POP! at 9:09 PM