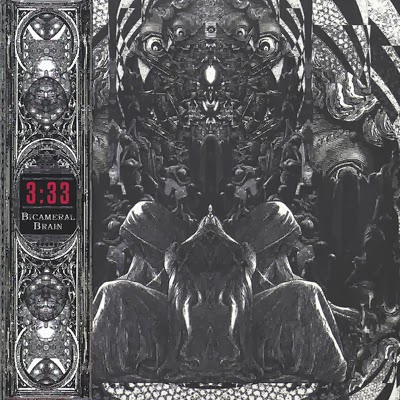 The strangely named 333 have been making some of the strangest music you'll ever hear for longer than I can remember. This unit of post apocalyptic musicians create a world in which doom is the norm and abandoning hope the ideal. They make sounds that tend to drone on and on in an eternal and hopeless struggle to escape the underworld; happy campers they are not. Their latest album Bicameral Brain is an epic two CD set of ambient noodling that would seem appropriate for the final invasion and colonization of earth by aliens.

This is a huge, epic, all encompassing record that's so laden with atmosphere that it almost collapses from the weight of the songs. This is a record that washes over you like a never ending tsunami of depression. If you had to nail down Bicameral Brain in four words it would be thought provoking, doomy, and expansive. With songs that stretch beyond the outer points of our comprehension and riffs to go along with that Bicameral Brain is a record that could seemingly play in the background for the rest of humanity's existence without much notice. It's epic stuff that echos around your brain like a bouncing ping pong ball potentially giving you a migraine.

333 are not the type of band that's on a never ending quest for the spotlight, rather, they lurk in the shadows creating the ambiance of every day life and the end of it. Whether or not they're clinically depressed can be debated, but what can't be is that this group are experts at creating wandering atmospherics that are stirring, haunting and apocalyptic. If these are the end of days, than 333 are the house band for humanity's extinction.
Posted by Paul POP! at 7:00 PM

Email ThisBlogThis!Share to TwitterShare to FacebookShare to Pinterest
Labels: 333