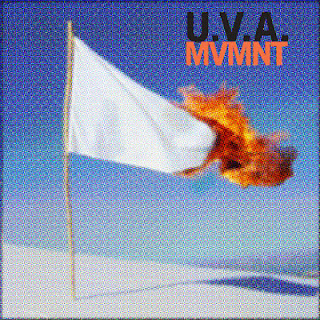 U.V.A.'s latest EP MVMNT is a dreamy electronic wonderland that sounds as though it were recorded at the exact moment between being awake and falling asleep. The group has created a fresh batch of synth pop from the great beyond and its awe inspiring stuff. With wondrous synths, vocals that are reminiscent of Ian Brown at his Roses best, and bubbling beats MVMNT is a lush record whose four songs are not enough quench your thirst.

From sleepy ballads ("Cassidy,") to more upbeat tunes ("Typical Queen,") MVMNT's ethereal and dreamy sounds are something to behold. This is like listening to a classic Creation or 4ad record from the early 90's that never got released. It's absolutely awesome stuff that's lost in a synthetic haze that's opulent and unearthly and U.V.A. have created something that's as close to being a goose bump moment as humanly being possible in music. MVMNT is a synth pop symphony of seductive and sensual sounds that's as lost in the haze as it is found as asleep as it is awake and as amazing as it is unreal; excellent stuff then.
Posted by Paul POP! at 3:17 PM

Email ThisBlogThis!Share to TwitterShare to FacebookShare to Pinterest
Labels: uva