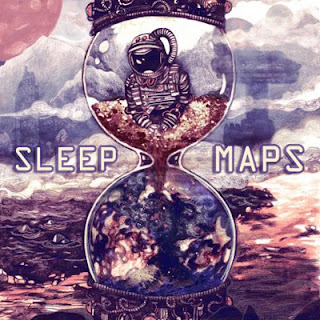 Sleep Maps album Fiction Makes The Future is anything but sleepy or mapped out. Instead this sprawling forty minute EP is a metallic, grindy, post rock excursion into the world of science, sound, and the apocalypse. It's an amazing array of riffs, future forecasts, atmospherics, and an overwhelming sense of power all smashed together via musical fission. The songs that make up Fiction Makes The Future are epic in nature and technically brilliant in construction and so set up for your imagination it's exciting to just sit and listen.

With the average song clocking in at well over six minutes the band have so much space in which to let the riffs flow Fiction Makes The Future has the potential to go on forever. Quite honestly, that's ok because these guys can play and play so well that listening to ten hours of these guys just going nuts would be freaking awesome. Sleep Maps are the real deal and they've shown what you can do when you take metallic riff assaults and mix it with post rock atmospherics. Fiction Makes The Future is a stunning look into the future and it's the sort of thing that's imaginative, technically proficient, and widescreen in it's scope. Sleep Maps have built an impressive record here and if you're a musician of any kind you need to pick this record up and just analyze the heck out of it.
Posted by Paul POP! at 3:37 PM