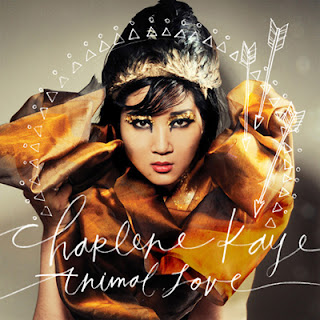 Ok, let’s just get this out of the way right up front; Charlene Kaye is a singer/songwriter but she's not what you’re thinking. Taking her folk roots and jazzing them up and then sugar coating with a layer of pop Kaye makes music that crosses genre's with ease and steers far away from being a cliche. Her album, Animal Love is a tour de force of Kaye's songwriting talents and her voice.

To say that Charlene Kaye can sing would be an understatement. The girl can belt out notes and melodies so well that it will leave you in awe. She's all over the place on Animal Love and displays her range from jazzy arrangements, electro floor fillers, folky mellowness and everything in between. I mean within the first two songs alone she's hitting peaks and valleys most vocalists would only dream of and it's awesome.

When you ad in the fact that Animal Love's songs are as diverse as her vocal range, the whole experience is something to just sit and listen to. Animal Love is a complete package; from top notch production, to catchy songs, and of course that voice it's all here and it's the sort of thing that deserves to be gargantuan. In a world with overblown American Idol nonsense Charlene Kaye could very well be America's Best Kept Secret. I suspect that she's ok with that because it allows her to explore her songwriting talent as well as her expansive voice.

Animal Love is a fantastically diverse record that frames what Charlene Kaye can do so well that it's almost like a work of art. This is a record that jumps from genre to genre with ease, lets Kaye's vocals carry it and keeps you enthralled throughout. She may enjoy being America's Best Kept Secret but it can't last forever. Kaye is a brilliant musician with one heck of an album and it's only a matter of time before the rest of the world finds out about her. It's inevitable.
Posted by Paul POP! at 3:42 PM