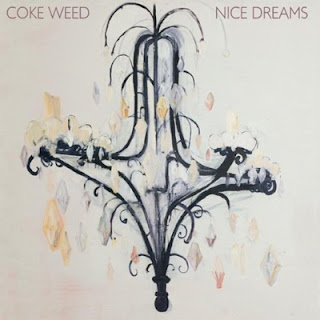 Despite having one of the most questionable names in all of indie-dom Coke Weed are not as bad as their name would seemingly imply. Far from being neither a nuisance that cannot be killed nor a narcotic that's illegal (or a sugary soft-drink) this band is far too dusty and dreary to be anything of the sort. Their album Nice Dreams is a shuffly, rustic, nearly acoustic affair that at times will remind you of Mazzy Star at their most countrified and the Velvet Underground at their most rural.

Nice Dreams is a twangy, hazy, odd folk record that just discovered electricity and is learning what it's all about. This is a rustic kind of record that's simple in its pleasures but rich in it's songs. Featuring the bare minimum of instrumentation required for a band and enough boy-girl vocal melodies to make it almost seem like a conversation Coke Weed muddle their way through Nice Dreams is beautiful fashion. This is an uncomplicated record that relies on its songs and harmonies to charm you and it works perfectly.

The pastoral and austere sounds that make up Nice Dreams weave a tapestry of folk inspired tales that sound as picturesque as they do wonderful. They might have a rather bizarre name but Coke Weed have a solidly simplistic and countrified sound that's something to behold. Nice Dreams is an excellent album that would make Hope Sandoval blush and it's nice to know that dusty and dear music can still sound so honest, pure, and good.
Posted by Paul POP! at 6:09 PM