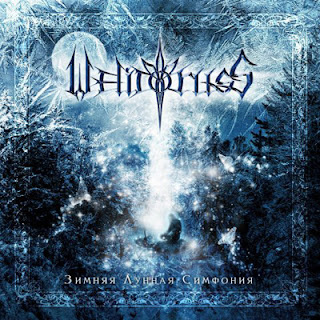 Sometimes you discover cool things where you least expect them. Such is the case with my discovery of Domestic Genocide Records. I had no idea that this underground metal label was actually run by a co-worker of mine here at First Coast News just 100 feet away. It's absolutely nuts and kind of hard to believe...but it's true. And so Trevor Master of the Hub has opened up the gates of underground metal here at FCN and allowed Welicoruss to come across my desk.

Named after the guitarist and vocalist of the band, Welico Russ, the group creates operatic, gothic themed, black metal that sounds like a million Rubles. Their latest album, Wintermoon Symphony is an epic materpiece of guitar pyrotechnics, soaring operatic vocals, growls from the abyss and a record that is cold as ice. Wintermoon Symphony is an expansive all encompassing record that's as stark and brutal as the Siberian landscape. Melodic but brutal, Welicoruss find the perfect balance between atmospherics and heaviness and create songs that allow both elements to wash over each other. The result of all this is that Wintermoon Symphony sounds larger and feels bigger than life. It's a winter wonderland of mysticism and power that is nigh impossible to escape from.

Welico Russ and the rest of his band (Elias, Paularic, Sower, and Dizharmony) play the heck out of their instruments here which only furthers the impressive nature of this record. It's blatantly obvious they are masters of metal and have chops on top of chops. The riffs are brutal and yet technical while the drums churn heavy doses of destruction and the synths give Wintermoon Symphony an icy almost medieval sheen that will give you shivers. It's an amazing sounding record that's crisp, clean and deadly. Technically proficient, melodically masterful and brutally brilliant Wintermoon Symphony is a fantastic record that brings the icy coldness of the north into your living room (or television station in my case) and freezes it over (which is insane because it's already -38 in here).
Posted by Paul POP! at 4:11 PM

Email ThisBlogThis!Share to TwitterShare to FacebookShare to Pinterest
Labels: welicoruss