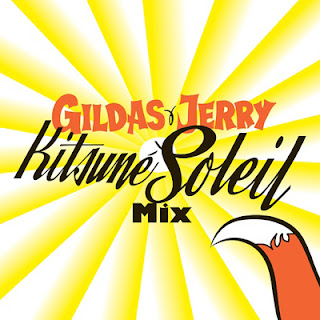 One of the nine million reasons why living in Florida is great is that we very rarely have long winters, if winters at all. It's pretty much some degree of summer here every day of the year which makes listening to the latest Kitsune compilation a year round kind of possibility. Entitled, Gildas & Jerry Kitsune Soleil Mix, this is the soundtrack to the summer wherever or whenever you find yourself. It's Ibiza wrapped up into a 5.25 inch disc and it's amazing as an island sunset.

Gildas & Jerry Kitsune Soleil Mix is packed to the gills with twenty blinding electro, house, and synth pop tunes that are blended to sunshiny perfection by Gildas & Jerry. This is a massive journey in 4/4 synthesized sunshine that's so ridiculously groovy there isn't a dance floor on the planet that wouldn't be packed out if this mix were to be played. Filled with huge names from the Kitsune roster including M83, Citizens!, Jupiter, Gigamesh, Metronomy, RAC as well as smaller artists such as Like Woah!, Reflex and Moon Boots it's got a little bit of everything under the sun. Amazingly, there's not a duff track amongst them all. It's twenty tracks of pure non-stop bangers that have hooks the size of Jupiter, beats as crisp as a new $100, and a vibe that is nothing but celebratory and excitable.

Gildas & Jerry Kitsune Soleil Mix is yet the latest installment in Kitsune's incredible track record of awesome releases. While the rest of the world has made dance music so aggressive it's become metal, Kitsune have never forgotten that it doesn't need to be like that. They're the home of the hook, the masters of massive tunes and home to incredible artists. Gildas & Jerry Kitsune Soleil Mix proves that twenty times over.
Posted by Paul POP! at 4:41 AM

Email ThisBlogThis!Share to TwitterShare to FacebookShare to Pinterest
Labels: gildas and jerry, kitsune