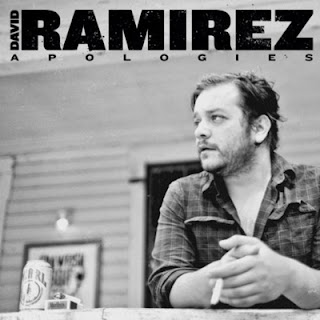 David Ramirez makes Apologies on his latest album and after spending some time with his record, I accept them whole heartedly as I cannot listen to another album of alt-country/folk music. Apologies is an intimate, solo affair that's quiet, meandering, and unexciting. The record seemingly is a constant barrage of stream of conscious mumblings that only occasionally raises it's voice to let you know it's still alive.

After about twenty minutes I found myself hunting, searching begging for those moments. I needed a spark, some energy, something instead of a guy with a guitar moaning and rambling into a microphone. It's really only when Ramirez taps into his inner country star that Apologies is worth listening to. It's at that point that you discover the guy has a certain twang in his voice that lends itself to pedal steel and brokenhearted country rock. One can't help but wonder if he should just give up the folk career and take up country full time because he seems to be much better at it. Anyway, the countrified songs on this record show a spark within him that he needs no Apologies for as they're tolerable tunes.

As it stands though, those bursts of energy are few and far between and as a result Apologies is just hard for me to listen to. It's almost too boring for me to listen to all the way through but I managed. Thankfully, I'm fairly resilient. So, allow me to offer my Apologies David Ramirez, because I tried...but I just can't get into the whole intimate acoustic thing; I think I'm too chipper for that.
Posted by Paul POP! at 5:45 PM