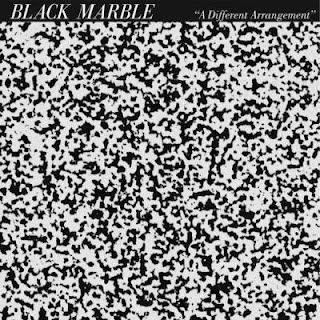 Black Marble are probably the coolest bunch of minimalist musicians to find themselves in front of keyboards in a very long time. Creating stark, bleak, cold synth pop the way OMD used to this dynamic duo hark back to the days when synthesizer technology was something relatively new and using it exclusively without guitars was almost considered experimental and odd. Their album A Different Arrangement is a perfect combination of that ancient technology and European detachment while still maintaining a degree of Brooklynite hipness.

Whether they're doing this stuff for the ironic nature of it or because they really love the early synth pop pioneers is a debate for another time, irregardless A Different Arrangement manages to be a fantastic album that sounds thirty years late to the party. Perhaps like a Magnetic Fields record played at 16rpm while layering 80's new wave on top of it, A Different Arrangement is a slow moving wave of synthetic pop that seems isolated, depressed and totally in touch with its psychological issues. Beats slowly pop while vocals sound off as if they were recorded in a hallway and the lush, minimal synths blanket it all in a chilly layer of opulence and aloofness. The songs, despite being rather un-energetic, are still memorable and danceable and Black Marble are so well versed at creating this stuff that they could very well be be OMD.

A Different Arrangement is the sort of record to get lost in a haze with and then never find your way out of. I love this record; it's clinical contemplation, lo-fi feel, and pseudo gothicism make it sound and feel amazing. Black Marble are awesome but in a brutalist, self destructive way. They don't sound happy, their songs don't feel happy, and their album is too sparse and subdued to actually be happy. None the less anyone in touch with their inner goth or Teutonic minimalist will absolutely love this record and find it an essential piece...like all that Bauhaus furniture.
Posted by Paul POP! at 5:03 PM