Apache Dropout Should Drop Back In 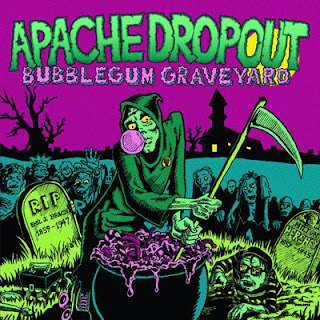 Ok...I love garage rock, I'm a mod after all so it's almost like a requirement. But not every garage rock band is good. Not everyone can be as good as The Sonics or The Mummies some bands are just, um, not good. That's kind of where Apache Dropout comes into play. They try they really do but they're just a little to "garagey" to be that good.

Their album Bubblegum Graveyard is raw like botulism, rough around the edges, and sounds like a very young band taking their first steps away from practicing in their house. Sure, there are some moments where they click but for the most part much of Bubblegum Graveyard sounds like a bunch of guys learning to play as they record at the studio. I tried to like the record, but I think it was just a bit to roughshod and un-polished for me to get over; and I'm not 100% sure I liked the vocals.

If you like hearing messy, sloppy, rock and roll recorded by guys who may or may not know what they're doing then Apache Dropout is for you. While they do have a few eureka moments on Bubblegum Graveyard much of this effort is just difficult to listen to. Sorry guys...but I think from the garage to the bubblegum graveyard isn't the best move.
Posted by Paul POP! at 5:36 AM