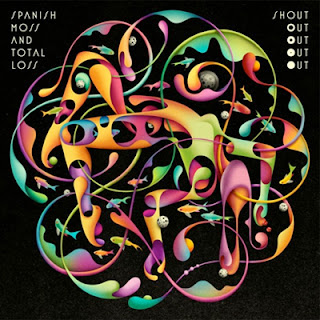 One of my favorite bands that no one knows about has just released their latest album and as per usual it's a doozy. Shout Out Out Out Out's latest masterwork, Spanish Moss & Total Loss

Shout Out Out Out Out in the span of three albums have gone from quirky song titles and an out of control sense of humor to spaceship captains on the Starship Raverprise. SOOOO utilize synths to create atmopsherics from beyond our galaxy but bring them back to earth with beats that your feet and brain can relate to. They then polish it all with a brilliant sheen that makes their songs glisten like gold and as a result are so shiny and bright that their amazingness just about blinds you. From the Eno-ish soundscapes to brilliant post punk funk the record is all about atmospherics and creating an abundance of it.

What makes Spanish Moss & Total Loss such an awesome record is the fact that it's much more than just a record. It's not just a collection of songs, it's a journey. This is an album that starts off slowly and inconspicuously but builds itself up into a massive frenzy of funky, vocoded, synthed out brilliance and then after it's all over gently brings us back down to earth to recover from the last hour. It's a trip to the spiral bands and back in less then 80 minutes that will leave you breathless.

I really don't even know what else to say about this record except if you like anything remotely related to funk, synth pop, dance music, or just moving this record is a heady trip that's like the best night IN you've ever had. You need this record in your life, like you need food; it's pretty much essential stuff.
Posted by Paul POP! at 5:53 AM