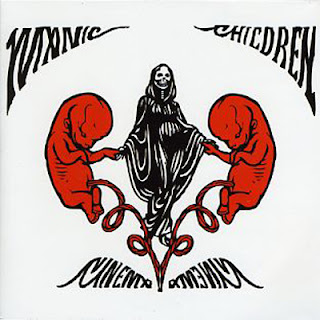 Anyway, Cinema Cinema is a dynamic duo that seemingly hover between being a garage rock band and some sort of mopey post jam band lost in the late 90's. Manic Children and the Slow Aggression as a result is raw, under-produced and and almost a bit too lo-fi for it's own good. Songs that try to be dramatic and sweeping sound a tad bit underwhelming and ineffective leaving you kind of bored. However, when the band head back to the garage and turn it up a notch, they're absolutely fantastic at what they do. The rawness, underproduction, and shambolic nature of the band makes these songs sound good. It's at this time you begin to think that these guys have an edge and punkiness hidden about them that throws two sheets to the wind, cranks it up, rocks out and makes a complete mess of everything. Riffs reverb everywhere, pedals are placed in over drive and these tunes sound like something Kim Thayall would have recorded in his bedroom in 1991. It's post grunge garage rock with a bit of punk and pop thrown in for good measure and when it's on it's on and when it's off it's way off. Why these guys would choose to get schmaltzy at times is beyond me because the power of rock clearly compels them.

If Manic Children and the Slow Aggression were all...manic...this album would be amazing. The energy and a purity that pulsates through the rawness and punky moments of Manic Children and the Slow Aggression's save it from being bad. It's primal stuff that Cinema Cinema tap into at times and when they do they become mad men; it's something they should just stay locked into and make records while they're at it.
Posted by Paul POP! at 5:15 PM