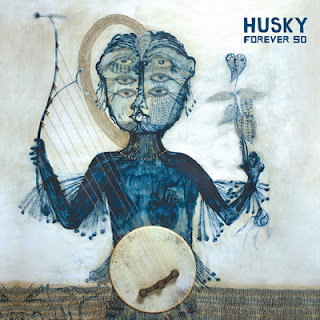 Husky are a quartet of Australians who sound like they're more from the Outback than any city on the continent. Rustic, rural, and a bit countrified this band not only keeps it in the family (a few members are related) but they just about keep it to themselves and out of the music scene altogether. Their album Forever So is an intimate, lonesome, slightly psychedelic, dramatic work of musical art that's pleasant enough.

With acoustic instruments, pianos, horns, and slightly out of tune but sleepily cool vocals it's kind of like Husky play a unique style of sad core that's not all that depressing. It's almost as if Low were on happy pills. The songs aren't energetic or hyper, rather, they're calm, peaceful, and almost stoic in nature. Thoughtful to a point but never wallowing in what they dwell on Husky make Forever So seem all too brief. There are elements of Arcade Fire within the band and you can hear them getting in touch w/their inner Mark Kozelek as the album progresses which kind of goes back to the sadcore thing. It's all rather nice stuff that's sweeping and as dramatic as a storm moving across the Outback.

Forever So is a beautifully created album of near isolationist ballads. It's an emotional, exhaustive journey through quiet songs and ephemeral sounds. It's the sort of record that your mind gently drifts off to while deep in thought and never comes back to. It's a nice journey that could potentially last Forever So.
Posted by Paul POP! at 5:42 AM

Email ThisBlogThis!Share to TwitterShare to FacebookShare to Pinterest
Labels: husky