Magic Trick Is Ruler Of The Night 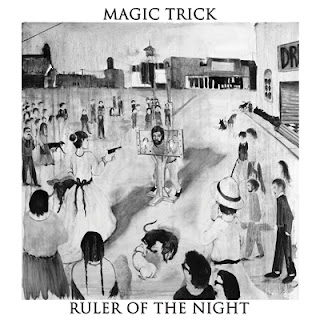 Magic Trick through the use of err magic have expanded from a one piece auditory experiment of Tim Cohen to a full on band. Moving on from the tapes Cohen used to create as a side project from The Fresh & Onlys, he recruited bandmates to not only play these experiments live but eventually record them as well. And since there's strength in numbers and additional audio possibilities with multiple members Magic Trick evolved from a one man band to a full fledged group recording records like their latest Ruler Of the Night.

Sleepy enough to the point where you have to wonder what these guys are on, Magic Trick sound like a strung out version of Tindersticks, a sedated version of Nick Cave's more poppier moments or a countrified Magnetic Fields. It's slightly rockabilly, slightly dramatic, melodic as all heck and lo-fi to the point where it sounds like the band crammed themselves into Cohen's bedroom to record. It's nice stuff all around and the melodic and nearly ethereal guitar work truly help the record work in the long term. With an intimate vibe and a low budget feel Ruler Of the Night still sounds like Cohen's solo stuff except that it's got a few more layers to it and an added dimension.

Ruler Of the Night is an honest and pure record; it's simplistic and unfettered by lack of production. The songs that make it up are packed with harmonies and strummy gauzy guitars that sound nearly broken. I guess you could say this is folk rock with a twist but unlike the rest of the genre this is actually listenable. Dreamy, hazy, and recorded on about a $10 budget Magic Trick casts a spell with Ruler Of the Night that will leave you enraptured.
Posted by Paul POP! at 6:00 PM