Meklit & Quinn Have It Covered 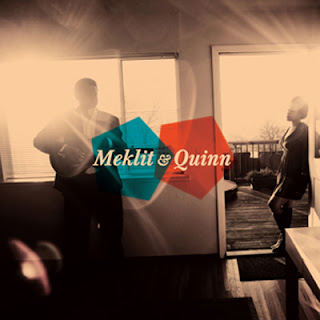 Meklit & Quinn are a unique songwriting duo who toss genres aside, blend influences, and mix sounds as if they were gourmet chef's. Their self-titled album is a mellow, chilled out blend of jazzy influences and folky sounds pasted on top of songs that you already know. It's a joyful, optimistic release that's upbeat and arranged so well that it's hard to find fault with.

While a vast majority of these songs are alternative oriented covers, Meklit & Quinn give them an adult oriented feel. Instead of the pop or rock sensibility that would normally be present on most of the songs have been swapped out with music so well played and constructed that the tunes are airtight, professional and and almost unrecognizable. In fact, I have to admit that I had no idea this was a covers record the first time I listened to it. With such varied influences pulsating through it, Meklit & Quinn is an imaginative record that takes something you already know and re-shape into something completely different. It's crazy to hear MGMT, Arcade Fire, Talking Heads, Lou Reed, Patti Smith, Stevie Wonder, Neil Young, and Sam Cooke crafted into something completely different while remaining the same. Meklit & Quinn is awesome in that sense because they take their favorite songs, experiment with them and then make them the duo's own. Throw in a couple of originals from the duo and you have an album that's just about one of the coolest chill out records to come across our desk in ages.

Covers records are a dime a dozen and it's really only the ones where something is done differently that ever stand out. Meklit & Quinn is one such record; it's so unique sounding that it disguises the covers and makes them sound like original compositions. It's an impressive effort all around and the few originals that appear also give a peek into the world of Meklit & Quinn and shine some light into where their musical backgrounds are coming from. Hopefully their next record will feature those backgrounds in a full album of original material; until then this record is definitely worth a listen.
Posted by Paul POP! at 4:05 PM

Email ThisBlogThis!Share to TwitterShare to FacebookShare to Pinterest
Labels: meklit and quinn