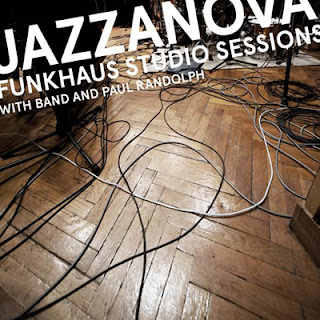 The concept for Jazzanova's latest album was very simple, producers Stefan and Axel went into the studio with their seven piece live band, took vocalist Paul Randolph with them and recorded the set. Entitled Funkhouse Studio Sessions the record sounds like a perfect session of top notch musicians riffing off one another and playing a soulful, funky, and jazzy set of tunes. The whole thing just seems to flow out of all that are involved; it feels tight and yet spontaneous and that's the sign of a band that's truly on top of their game.

Sounding at times like an Al Jarreau record Funkhouse Studio Sessions is perfectly chilled jazzy funk that's light, airy, and filled with enough bright brass to blind a man. The songs are organic and free flowing and even vocalist Paul Randolph sounds like he's half improvising through the record. Funkhouse Studio Sessions is just packed to the rafters with top musicianship the whole way around; the cd can barely contain it all. And while this might be their first "live" album it sounds like they've recorded a hundred of them and that they've been playing together just as long. Riffing through favorites from tours past, fan favorites, and their greatest hits, this is a cool journey through the past and present of Jazzanova with a live flair.

Funkhouse Studio Sessions is a fantastic record that's sure to please anyone who has ever liked Jazzanova. If you've never seen these guys pull this stuff off live, this is like the next best thing as you can hear just how good the band really is. From chilled out jazzy tunes to funky jams, Jazzanova just goes with the flow and impresses throughout the Funkhouse Studio Sessions.
Posted by Paul POP! at 4:35 AM

Email ThisBlogThis!Share to TwitterShare to FacebookShare to Pinterest
Labels: jazzanova