It's A Daydream Vacation 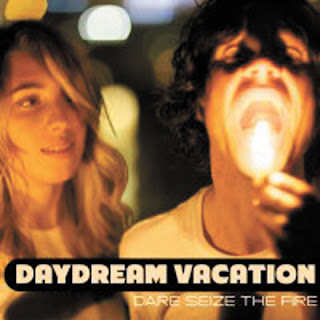 Remember Smoosh? You probably don't because you were as young as they were when they were around. In case you don't know or don't remember, they were the severely underage indie pop band that made quite a splash a number of years ago and blew every one away in the industry. If you want to talk youthful effervescence Smoosh defined it. But as time goes on kids grow up and projects end. Well Asya out of Smoosh did just that and somehow found herself working with Dave Einmo. The results of that work became known as Daydream Vacation and let's just say that they're not your little sister's Smoosh.

Their debut album Dare Seize The Fire is an awesome synthetic romp through the pop world that's just about perfect. Aysa's voice has matured into that of a synth siren and she sighs her away across many of the songs here with a seductive cool that's confident and convincing. Much of Dare Seize The Fire is like that. This is an album that sounds well beyond a "debut album." The electronics generate grooves with ease, Dave and Aysa's voices tag team off each other and the hooks are super tight. This is a record that's almost instantly memorable and the first single from it, "Clever's Not My Best Excuse," is easily one of the best tunes of the year. Dare Seize The Fire is synthetically sugary sweet and easy on the ears; it's not complicated, not difficult, just consistent synth pop jams that will have you shuffling around the house.

While I wasn't too much of a fan of Smoosh, Daydream Vacation is a whole different ballgame. These guys kill it on Dare Seize The Fire and I honestly haven't stopped listening to this record for two days. Huge hooks, massive melodies, and endless grooves make Dare Seize The Fire easy to get down to and easy to seize control of. One of my faves of the year...easily.
Posted by Paul POP! at 4:55 AM