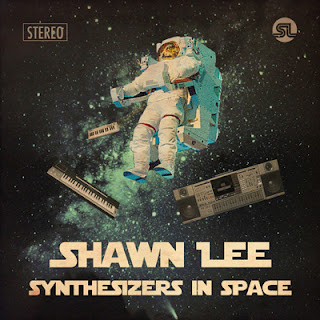 Shawn Lee's latest album is a bit misleading. Named Synthesizers In Space you would think that the record would be full of synthetic sounds, synth pop grooves, and danceable fun. If you thought that, however, you would be wrong. Instead of sounding like it was rooted in 80's new wave pop, Synthesizers In Space sounds more like it came from a 60's or 70's crime thriller.

Packed with instrumentals, samples, jazzy bridges, Hammond organ grooves (synthesized?), groovy basslines and a whole host of other things that would make you think that this record isn't from space but was pulled from The Streets Of San Francisco. Shawn Lee has a field day here creating moving, kinetic, instrumental pieces that are atmospheric and imaginative. While there are synthesizers undoubtedly pulsating throughout this record it is not the dominant force here; Synthesizers In Space is far too organic for it to be cold, plastic, and fake. I really like how Shawn Lee has built this little world within this record...it's good enough to get lost in and I suspect that while his synthesizers may be in space, his heart is in the city and it's alive and well.

Synthesizers In Space is an awesome record that jolted my imagination and had me recreating scenes from Bullitt. It's a crazy ride through the dark side of the city and it's filthy grooves, atmospheric organ work, and jazzy influences give the record a vintage feel. I love records like this because not only are they good musically speaking they get your mind going at the same time. Synthesizers In Space is a full sensory experience and it's awesome.
Posted by Paul POP! at 4:35 AM