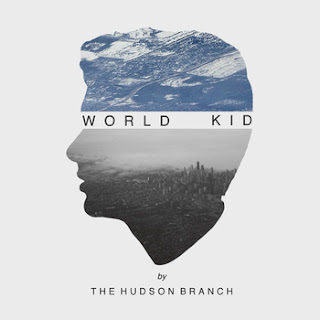 Hudson Branch are a moody and atmospheric band whose album World Kid is fitting description for a record that sounds well traveled, well rounded, and well good. Influenced by everything from chamber pop to blues and everything in between Hudson Branch brew a heady concoction that's something like Burt Bacharach colliding with Vampire Weekend. It's all twinkly guitar riffs, organ hums, nearly jazzy drums, and delicate fey-ish vocals that when they combine together it all sounds very sophisticated and cool.

World Kid is a polished, tightly played record that shows Hudson Branch have ridiculously good skills when it comes to creating and playing songs. If you can picture bands like Aloha and Ivory Coast who blur the lines between indie rock, jazz, and a global sense of cool then you have a pretty good idea of how Hudson Branch go about putting together songs. Atmospheric noises swoosh in and out of songs, lift them skyward and then allow the band to float back down to earth on the gentle strums of a guitar. It's all very moody and sweeping stuff that requires attention to appreciate it. There are no huge radio hits here just a solid set of superbly played songs that are written very close to perfection.

Hundson Branch takes the atmosphere around them and manipulate it by funneling sounds, textures and ideas into it. They excel at this and seemingly can make the simplest things seem rich and intriguing. They may not have a huge hit on their hands but they do have one of the best played records I've heard in a while and you can tell that these guys are World Kids because they refuse to be limited by a single sound idea. World Kid is the kind of record that musicians will love and music fans will enjoy.
Posted by Paul POP! at 2:11 PM