Young Liars And Their Homesick Future 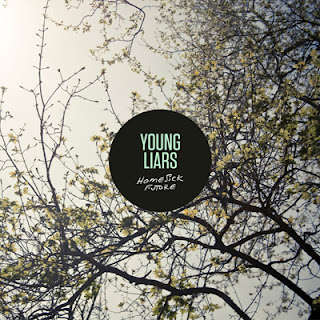 Young Liars are a interesting band with enough international intrigue around them, that they could almost be a living spy novel. Their story begins in an Algerian bar underneath the streets of Paris and ends up in a studio in Canada. Intrigued? You should be because the result of that story comes to us in the form of their record Homesick Future EP.

Taking that intrigue of those Algerian bars, French culture, Canadian pop, and a world music vibe the band sound something like the best thing that Vampire Weekend and Hot Chip never recorded. It's a worldly pop music journey across the dance floor with jaunty rhythms, synthesized atmospherics, soaring vocals and melodies that melt in your ears. This is a great record that's bright, dancy, and extremely catchy. There's a wave like groove that crests about four songs in and carries you to the end and brings you home breathless but satisfied.

Homesick Future is an impressive effort that shows quite evenhandedly that indie and dance are so fused together at this point it's pointless to even think of them as separate. With that fusion firmly in place its easy to understand why there's not a bad song here. It's globally influenced, optimistic and its energetic feel makes the record fun to listen to. At seven songs Homesick Future is a brilliant primer of the band's potential and there's a lot of it; it leaves you wanting more and I suspect that's just the way they want it.
Posted by Paul POP! at 8:28 PM