Unnatural Helpers Are In A Land Grab 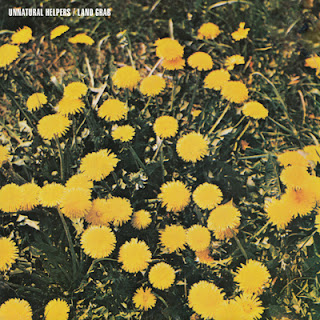 Unnatural Helpers are a band that simply don't waste time. This four piece band are in such constant motion that they can't even keep members long enough for them to collect royalty checks. They are the definition of perpetual motion and if you were to tal about bands that are energetic, frenetic, and chaotic this band would be on the top of any such list. These guys play with urgency, speed, and a reckless nature because who knows if they or their songs will be around tomorrow.

Seemingly straddled with ADHD, Unnatural Helpers are a spastic, jerky, punk group of musicians who seemingly blast their way through songs and plow through riffs as if they were butter. Their latest effort, Land Grab, is such a short record that it's almost over before it starts. With most songs on the album being under two minutes long there's not a second wasted on things like solos, bridges, or choruses; seriously. This record makes it's impact by sheer force of will; it's blistering energy, hyperactivity, and punk feel pretty much bashes you over the head and makes an impression and it leaves a welt until the very last song. What's crazy about all that is that even though the songs on Land Grab are under two minutes and fly by, every single one of them is awesome. These are short, efficient, effervescent shots of rock and roll that's all killer and no filler (exception being the strange, uncalled for 9:45 album closer..which is almost as long as the rest of the album).

Unnatural Helpers know that keeping things short, sweet, and simple is a good rule of thumb and that's exactly how Land Grab is built, as something that has very little time to spend on extraneous details. Far from a meandering and pointless record, Land Grab is sharp, to the point, and powerful. It's not extravagant and doesn't squander it's opportunities; it tunes up, plugs in, and goes full throttle til the very end in a burst of energy that could be likened to splitting the atom. Land Grab is awesome garage rock as a result of those outbursts and Unnatural Helpers are amazing at churning out timeless tunes with more energy than a nuclear reactor.
Posted by Paul POP! at 5:38 PM