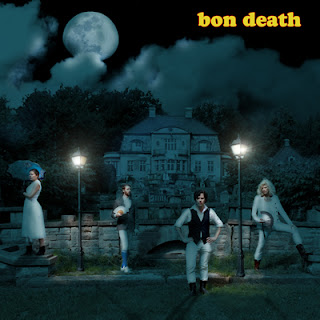 The rather strangely named Bon Death's latest single Dream Girl is a slab of glammy garage rock that kicks butt with a soulful vibe and a rock and roll heart. Sounding very influenced by the 60's the single has a two step beat with dramatic female vocals seductively singing like her out of the Duke Spirit. It's all very passionate and vivacious in a rather seductive way. The tune is a hit in the making and had it been released in 1966 it would have been massive.

Bon Death are awesome at creating groovy rock and roll, man, and having heard Dream Girl and that's it, I feel like a) I've been left hanging out to try and b) I need to hear like thirty more tracks. A single in the truest sense of the word, this is too little too early. We need more Bon Death and we need it now.
Posted by Paul POP! at 5:09 PM