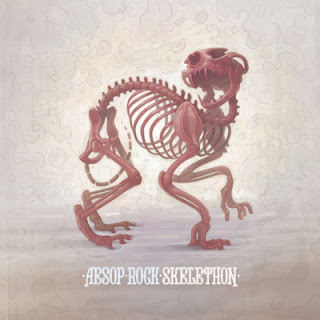 When one talks of independent hip hop one of the biggest names you can't help but mention is Aesop Rock. Having practically redefined hip hop as something more than just for clubs and cars, Aesop Rock continues to reshape the genre as he sees fit. And let's face it, he's done an amazing job of it thus far. He's garnered enough respect and kudos to fill a trophy case, but he refuses to sit on his laurels and continues to push the envelope. With the release of his latest album, Skelethon, Aesop once again demonstrates how good hip hop can be when it isn't corrupted by clichés.

Skelethon is a progressive record that features excellent production that works well in any environment. The beats throughout are crisp and sharp and Aesop’s flows are just about perfect. His rhymes aren't the cliché bling and babes angle but far more quick, thought provoking and surreal. Yes, you read that right, surreal. Skelethon lyrics are about the human experience and Aesop’s place with in it. Its good stuff and hearing him weave his tales will hit you right between the ears.

About three songs into Skelethon it's easy to see why Aesop gets all the credit he does. The guy is just different and he takes a completely different approach to making hip hop. His songs have plenty of funk and beats within them but there's everything else mixed in there too. This is a guy who has a team behind him that's not afraid to mix things up, to push things further, and to challenge not only themselves but the genre as well. For this reason and the fact that rhymes flow faster than the speed of light, Aesop and Skelethon succeeds.

In an age where mainstream hip hop is a multi-billion dollar industry, it's nice to know that people like Aesop Rock exist. Skelethon is so far from cliché that most mainstream hip hop stars wouldn't even know what hit them. It's a progressive slice of hip hop that's outside of the norm; it's underground and credible but is still accessible. It's the sort of thing you should listen too, because you know people like Jay-Z do. So pick this up and help push things forward.
Posted by Paul POP! at 1:11 PM