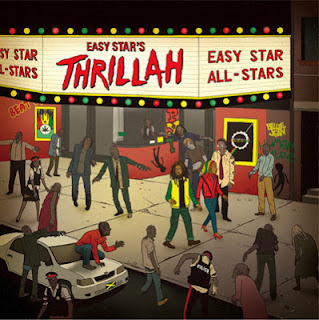 You know some things should never be touched. Some albums are just so sacred they should never be altered, covered, or even touched. And say what you will, Thriller is one such album. It's a record that pretty much defined and owned pop music in the 80's. It was huge back then and is to this day. It's legendary and the one work (next to Off The Wall) that MJ will be remembered for. That being said, I'm immediately skeptical of any sort of album paying tribute to this classic. Do I really need it? Can anyone bring something better to the table? I doubt it, I really do but nonetheless people continually release things trying. That's where the Easy Star's Thrillah compilation comes into play.

Rather than just doing a run of the mill tribute album Easy Star's put a whole different spin on the idea by doing a reggae version of Thriller. While not capable of competing with the original or even hoping to sound the same, the Easy Star's stable of artists attempt to bring something different to the idea of a tribute. They almost do a great job. Thrillah, truth be told, isn't too bad but it's the sort of thing that after about two songs has you reaching for the original. Essentially replicating the original album in it's complete order Thrillah has pop reggae influences, dub, instrumentals, and chilled vibes running throughout each of the songs. The Easy Stars do a cool job of keeping the original framework of each song but then taking it on a tropical tip and attempting to make it unique. "Wanna Be Startin' Somethin," and "Beat It," are probably my favorite tunes on the record simply because they almost lend themselves to the dubbed out grooves makes them up.

Thrillah isn't bad at all. It's just the sort of thing that unless you're a covers collector or mega MJ fan you don't really need. Don't get me wrong, it's cool, it's just not necessary when you can always just listen to the original. While the Easy Stars did bring something new to the table and make a tribute record out of the ordinary, it's just hard to sit through Thrillah when you could be listening to Thriller. You can't beat the original so that begs the question...why even try?
Posted by Paul POP! at 8:22 PM