Silversun Pickups Are In You Neck Of The Woods 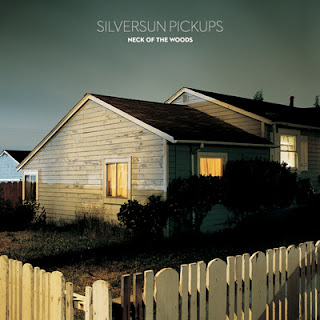 The meteoric rise of Silversun Pickups, I have to admit was a bit unexpected several years ago, but totally deserved. A cooler more genuine band you will not find so to say I've been a fan since the get go makes me pretty happy. Their latest album Neck Of The Woods leaves behind most of the post shoegazing elements that they built their sound on and sees the band veering into a bigger more expansive and slightly poppier sound. The new album is, of course, great but that's to be expected because if there's one thing this band is, it's consistent.

Neck Of The Woods doesn't necessarily forget where it's come from but Silversun Pickups gives their original sound so much depth, texture, and complexity that you can tell this band is growing up. Songs bounce all over the place with reverb pedals in tow, post grunge riffs churning away, and those hazy lackadaisical vocals reach all kinds of crescendos. This is the one band in America that can kind of get away with almost being led by an almost falsetto-ish vocalist. Neck Of The Woods soars in all the right places, is as bright and crystalline as you'd expect it, and still manages to cram huge pop hooks amongst it all. These are songs to fly along to. They shoot straight for the sun and just about get there as guitars phase in and out and songs come in and out like the tide. It's all very cool, melodic, and intricately pieced together. Neck Of The Woods is the sound of a band at the height of it's prowess; there's seemingly nothing Silversun Pickups can't do.

Neck Of The Woods might be the best record of Silversun's rather short career. The songs are huge, overreaching, grandiose and sound like a zillion dollars. These guys are quickly becoming beasts when it comes to songwriting and this record shows off their maturity in fine fashion. Post gazing has never sounded so big or bright. There's a reason why this band has become as big as they have; their songs are simply awesome. You'll want to be in Silversun Pickups neck of the woods and pick up this record.
Posted by Paul POP! at 4:47 AM