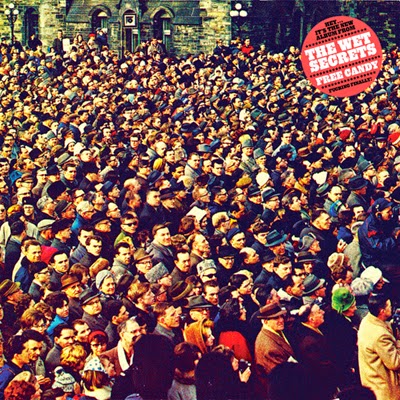 I’m not 100% sure I know what a Wet Secret is…or if I even want to know what one is…but this five piece band formed as a result of a dare are the kind of band you do want to know. Their latest album, Free Candy, is an unpolished rock and roll gem that might be a little bit late to the rock and roll party but sometimes it’s better to be late than to never show up at all. I’m definitely pleased they finally made it and I’m pretty sure after one or two listens to Free Candy you’ll be pretty glad as well.

Sounding like a Stroksian wave of revivalism from revivalists, this grotty, snarly rock and roll band stumble their way through the songs on Free Candy as if they had a bit too much of it to begin with. Taking lots of elements from early 21st century indie and fusing it with loads of keys, horns, dirty basslines and a drunken sense of awareness The Wet Secrets are the sort of band that would make The Libertines try a little bit harder. Plodding, catchy, and a bit persistent The Wet Secrets have so many memorable choruses on Free Candy that it almost gets hard to keep track of them all (I've got a list here beside me) With harmonies you’d swear they lifted off of Kim Wilde’s, “Kids In America,” to more Killers like electro you're sucked into their vortex of scuzzy cool by about the fourth song.

I really enjoyed how the band has this under-produced retro vibe to them and how Free Candy wouldn’t sound out of place in yours or your parents record collection. 1968 or 2003…you be the judge it makes sense either way. The feel, the songs, and the way that this is all presented is all a bit subversive and doesn’t feel right in a totally feels right kind of way and it works for the band perfectly. If this were polished and produced it would fail miserably; thankfully it isn't. They might have been formed on a dare, but The Wet Secrets are far from a sloppy concoction; these guys are actually really quite good. Messy and grotty in all the best ways Free Candy is definitely worth a taste.
Posted by Paul POP! at 8:36 AM