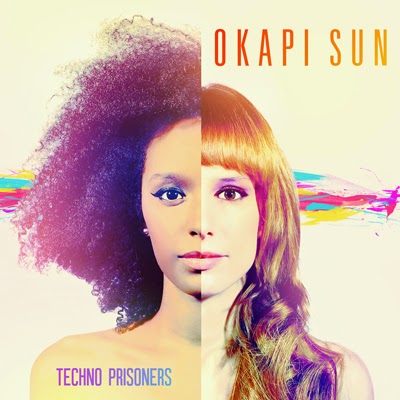 The Zoologically named Okapi Sun, have released a three song EP on the lead up to their new album Techno Prisoners. This three song affair is lush, sexy, and a nice mix between chillwave, synth pop, electro, and ethereal dream pop. Quite honestly the whole thing reminds me of the Other Two (look them up kids) so much so I had to double check that neither one of the Other Two were in this band. They're not.

The three songs that make up this disappointingly short EP, all feature massive hooks, seductively cool choruses and even a bit of humor thrown in. "Judy Baby," is a fine example of this, as the first thirty seconds of the song are so campy they're priceless. It's a nice reflection of a band who can write a seductive song one sec and then crack a joke the next. They may be hip and cool but they don't take themselves that seriously and I like that. Okapi Sun have stumbled on to something here and if this EP is any clue of how Techno Prisoners turned out, we're in for something special.
Posted by Paul POP! at 9:00 AM