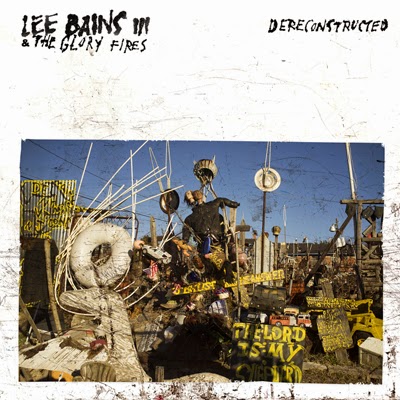 Lee Bains III & The Glory Fires album Dereconstructed is probably the most aptly named album I've heard in a long time. From just glancing at the cover to throwing this thing on to give it a spin there isn't a song on this album that hasn't dereconstructed rock and roll down to it's barest bones, beat it with a stick, roughed it up a bit more and then attempted to piece it all back together. This record is a sonic mess that's loud, brash, sloppy, and like a subdivision of garage rock called subgarage rock.

All that being said Dereconstructed is absolutely amazing. Sounding like Neil Young, The Rolling Stones, The Sonics, a bunch of broken amplifiers, lots of fuzz, and a sketchy analogue recording device about to die this is the sound of post-grunge chaos. This thing is noisy, brazen, energetic and being torn apart at the seams but that's what makes it so good. If this thing was polished and produced it would be horrible, but sounding like it was recorded in a freeway rest stop bathroom it has this scuzzy feel to it that gives the record a sense of eminent destruction. Every song is like this; chaotic and duct taped together but at the same time they're ridiculously memorable and have huge hooks in which to capture you with. This is rock and roll the way it was meant to be played and lived.

Sometimes you CAN judge a book by it's cover and Dereconstructed is one such instance. Just look at it up there...it's a junkyard on the cover. It's like a Rock and Roll Sanford & Son and that's exactly like Dereconstructed. It's a disastrous mess that somehow makes sense to someone. I love rock and roll and Lee Bains III & the Glory Fires reminded me why.
Posted by Paul POP! at 5:06 AM