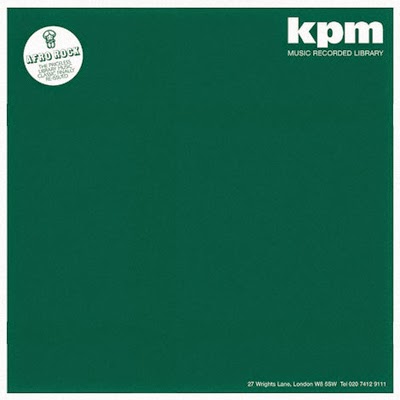 Working at a TV station and occasionally being involved in production one uses, from time to time, generic license free background music as beds for video, commercials, etc. These library of discs are all over the map from serious to funky, dramatic to touching. There’s a wide variety of music you hear constantly that someone somewhere has concocted for use as nothing but background music. What’s kind of depressing about that is some of the stuff I’ve heard over the years is actually very good and could be played out in a club, bar, and you could easily say it was someone famous and no one would ever know it’s just stock music. Well, that’s kind of where KPM comes in.

KPM is an interesting project from Time Love Lee & Shawn Lee that in their own words was done like this…Step 1: somehow find two copies of two rare 1970’s KPM 1000 series LPs featuring only the sparse rhythm section of bassist Herbie Flowers and drummer Barry Morgan, rather imaginatively titled Bass Guitar & Percussion Volumes 1 & 2 (stock music see) Step 2: Set out to faithfully bring the original recordings to their logical conclusion 40 years later by putting our dirty little overdubs all over them. So, in other words, Time Love Lee & Shawn Lee found a couple of stock, background music albums and set out to make them famous. I think, having listened to KPM Music Recorded Library, they’ve done just that. They’ve taken these snippets of sound and added so much on top of them and as a by-product created their own groovy library of stock songs. From comedic to sexy and everything in between, Time Love Lee & Shawn Lee have created a soundtrack to a fictional TV show that’s never existed. It’s imaginative, creative, and fun. It’s the sort of record that lets your mind run wild through shows like the Streets of San Francisco, Starsky & Hutch, or even something like the Rockford Files. Guitars, bass lines, horns, it’s all hear bringing to life the Bass & Percussion of Morgan & Flowers and it’s amazing.

While disappointingly short (like a true stock music CD), KPM Music Recorded Library is a fascinating look into the past and how two British music pioneers jammed together to make music for production purposes and nothing more. These guys have now been rightfully given their due and thanks to the Lee’s probably made their rock and roll dreams come true. If you work in TV (and have an ASCAP license) this little library is just about essential, if you’re a casual music fan this is a great listen and a fascinating peek into how music gets used for things outside of radio & TV. KPM Music Recorded Library is fun stuff and highly recommended.
Posted by Paul POP! at 9:25 AM

Email ThisBlogThis!Share to TwitterShare to FacebookShare to Pinterest
Labels: kpm