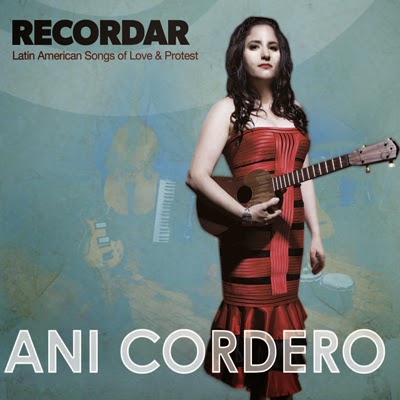 Multifaceted musician Ani Cordero has a fondness for looking back at history and the struggle for democracy in Latin America. This passionate interest came to the forefront while studying with Dr. Juan Allende, nephew of overthrown Chilean President Salvador Allende and it led to the idea behind Recordar: Latin American Songs of Love & Protest. Funded with the help of a successful Kickstarter campaign and put together with a ridiculously amazing cast of musicians from bands as diverse as Arcade Fire, the E-Street Band, Man or Astroman, and even Lee Scratch Perry’s band Recordar: Latin American Songs of Love & Protest is a lovingly played and exceedingly talented offering.

Tapping into the struggles of the past Ani Cordero hopes to enlighten future generations of fans of the history that preceded them. Finding and embracing songs that originated in the 60's and 70's from Chile, Argentina, Columbia, Brazil, Cuba, Puerto Rico, Mexico, Venuezuela, and even the Dominican Republic this Puerto Rican musician injects new life and new ideas into these classic songs of love and struggle. While obviously rooted in the originals, Ani’s updated versions breathe fresh blood into the traditional versions giving them an updated vibrancy. Weaving a rich musical tapestry that includes contributions from everything from accordion, trumpets, flugelhorns, Ngoni, Malian percussion and upright bass to traditional rock instruments the album is smorgasbord of sounds that are given depth and variety from the arrangements on each song. They might essentially be covers but Cordero and her musical collaborators make these songs their own as if they experienced each of these struggles and lyrics themselves.

Recordar: Latin American Songs of Love & Protest is unashamedly political but it’s painted with just beautiful strokes and played with such conviction that it never forces it's stance down your throat. While Ani Cordero’s goal here is to raise awareness about the significance of political art in social change even the most apolitical person in the world will find this hypnotizing blend of musical ingenuity entertaining. Beauty and brains…it’s a lethal combination and Ani Cordero has that and a ridiculous amount of talent and all one needs to do to see that is spend 45 minutes with Recordar: Latin American Songs of Love & Protest.
Posted by Paul POP! at 9:20 AM