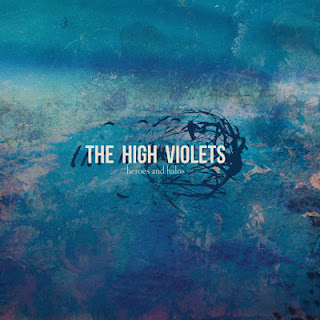 Five albums in and The High Violets kind of have the whole post-gazing dream pop thing down pat.  They know their way around ethereality and could sculpt a noise pop song in their sleep.  They know how to take their influences and make them their own.  These guys are good and their latest album Heroes and Halos does anything but disappoint.

While they often get compared to Slowdive, I really think of The High Violets as Saint Etienne lost in a shoegazing haze.  Vocalist Kaitlyn at times sounds so much like Sarah from Etienne you’d swear she was trapped in Foxbase Alpha.   This isn’t a bad thing in any way, shape or form and in fact, it’s all a bit endearing if you ask me.  While vocally the album has a slightly twee edge about it musically, Heroes & Halos is a blissed out beautiful trip through sheets of shimmering guitar noise.  The songs are wispy, willowy and as light as breeze.  It’s all really rather gorgeous stuff and the band create an aural aesthetic that as heavenly as the album’s name implies.   There’s so little to fault here because The High Violets know how to do this with their eyes closed and they don’t it really, really well.

Heroes & Halos is the latest album in The High Violets career that exceeds expectations.  In a world littered with post-gazing pop bands The High Violets have staked their claim as leaders of the new school and with Heroes & Halos it’s easy to see why; dreampop has never sounded so heavenly as it does here.  Perfection personified.
Posted by Paul POP! at 2:30 PM