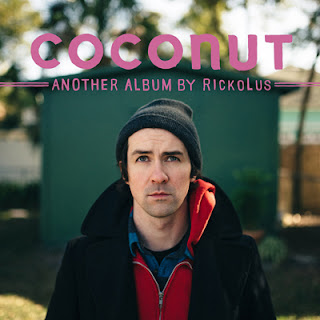 How the hell is Rickolus not a massive star?  This Jacksonvillian is easily the best musical product to come out of the Bold City since well...ever.  While other bands have risen to popularity overnight, Rickolus has been more of a slow burn when it comes to his music.  Yet, he's so consistently brilliant and well consistent in releasing material that's memorable, rooted firmly in indie rock and just so damn good that stardom deserves to be his. Seriously, world, get with the program.

His latest album Coconut is yet another quirky notch of brilliance in his career.  With massive hooks, choruses that linger for days and his kooky mannerisms Rickolus creates a tweeish pop world that's truly all his own.  Sure he jumps from post grunge, indie rawk and Britpop influences like a 12 year old girl skipping rope, but he does it with such finesse and assuredness that it works well for him.  I mean the first three songs alone on Coconut toss you around like a broken washing machine.  From the thrashy workout of “Wasteland,” to the massive soaring hit in the making, “Destroyer,” your heart will suffer heartbreak, chills, and possibly a coronary.  This is from a guy who lives in Duval folks.  Duval.  Rick and his band have crafted a brilliant record here that rarely falters and even the ballads are a worthy but heart wrenching five minutes of your time.

Coconut is fantastic in every conceivable way.  It's stupendously poptastic with enough of a rough edge about it to keep Rick's cred well intact.  Probably my favorite album of the last six months it's difficult for me not to picture this record getting huge.  Rickolus has the chops, has the songs, and has all his shit together enough where he should be hobnobbing with stars and establishing residencies in various London clubs.  Once again...success deserves to be his and Coconut goes a long way to helping achieve that goal.  You can help him get there as well by buying this record.  Now.
Posted by Paul POP! at 2:15 PM

Email ThisBlogThis!Share to TwitterShare to FacebookShare to Pinterest
Labels: rickolous