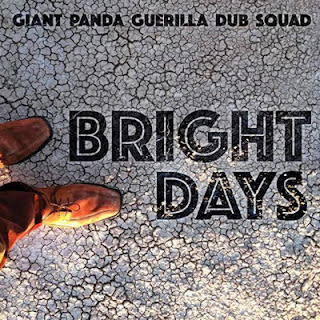 What happens when a band you know changes direction 180 degrees and heads off in that direction?  Well, if you're like me you kind of wonder if you're listening to the right band, double check the CD, and then read the band's bio and learn that this is nothing new.  You see, the Giant Panda Guerrilla Dub Squad pulled a fast one on me.  Their latest album Bright Days takes a left turn and speeds away in a direction far, far away from the reggae they normally play. This, believe it or not, is nothing new for the Panda's.  Apparently way back in 2012 the band explored this alter ego with their album, Country.  Much like Country, Bright Days is a twangy rustic record that sounds more like it was born on the prairies of Iowa then the beaches of Jamaica!

Yes, it's true my favorite oddly named reggae band is now doing country music.  Think of it like the Blues Brothers playing, “Rawhide!”   A fish out of water kind of thing.   It's crazy but it's true and what's even weirder is that it's not half bad.   Bright Days is Americana with a bit of verve to it.  Sure it's dusty and rustic but you can't shake the reggae out of the Panda's completely as the record is upbeat and even features a few instrumental riffs into native territory.  This whole thing really shouldn't work at all, I mean it is two totally different worlds soundclashing here but it actually does work and the Panda's aren't just being ironic about it.  They fully embrace Americana on Bright Days and do a good job of playing with the definitions of what they're about.  I love their versatility and the fact that they can play twangy, jangly, pastoral pop on top of reggae and dub makes them an even better band.

Bright Days may have been a risk but it was worth it.  The Pandas are fueled by creativity and open mindedness and their love of music apparently knows no bounds.  Bright Days is a great record that shows just how diverse this band can be.  They might be the Giant Panda Guerilla Dub Squad but deep down I know their cowboys at heart!
Posted by Paul POP! at 2:17 PM