Take The Scenic Route To Alaska 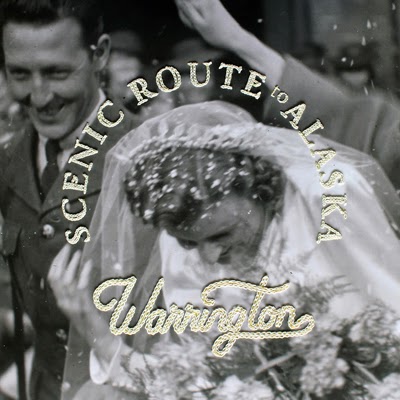 Canada's dominance in the indie rock market the last decade cannot be questioned. From Arcade Fire to the Balconies and everyone between Nova Scotia and Vancouver the list of ridiculously good bands coming from the Great White North is staggering. Among the bands on that list are Scene Route to Alaska. This Edmonton, Alberta quartet's album Warrington is a beautiful art pop record that mixes folk rock and indie influences to achieve a charmingly rustic and slightly off-kilter soundworld.

Sounding a bit like Clap Your Hands and Say Yeah mixed with maple syrup, Scenic Route To Alaska encapsulate all that's good about North American indie rock in the 21st century. With long drawn out croaky vocals that sound like they're about to die, guitars that meander until they find a groove, artful and angular songs that bring in a bit of everything Warrington makes for a very entertaining effort. Lilting folk ballads, uptempo stompers and enough creative uses of the human voice to leave you in awe Warrington is a pastoral symphony that's just enough back woods blended with the big city. It's a fun and gorgeous listen that's rootsy and provincial and finds a balance between rural and urban.

Say what you will, but whatever they're putting up in the water(or syrup) in Canada it's working from a musical perspective. Scenic Route To Alaska is proof of that and Warrington is an easy pill to swallow. It's melodious and skewed sound is as fun as it is unusual and the bands ability to mix the rustic with modern sounds is impressive. Oh, Canada!
Posted by Paul POP! at 10:02 PM

Email ThisBlogThis!Share to TwitterShare to FacebookShare to Pinterest
Labels: scenic route to alaska