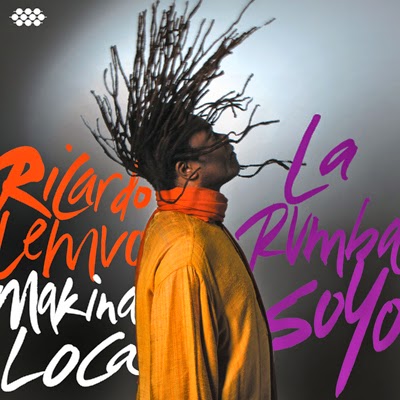 Holy multiculturalism Batman! Ricardo Lemvo & Makina Loca's latest album La Rumba So Yo was recorded on three continents and in four countries and took three years to complete. This labor of love sees Los Angeles based Lemvo diving deeper into his Angolan roots for inspiration while retaining the sounds already deeply rooted within him and his band. This exploration has led to an album that explores different languages, musical influences, and dance forms.

La Rumba So Yo sees Lemvo & Makina Loco teaming up with Angolan artists, using Congolese and Cuban musical influences, and Portuguese lyrics to bring their musical message home. It's a world map of musical sounds and it's simply fantastic; it's so globally exploratory it makes National Geographic seem small. Makina Loco's ability to blend and blur both African and Cuban influences is awesome, there are Latin rhythms everywhere and African styles permeating those rhythms; check, "E Moyo," for a fine example of this even though it's a cover of Congolese singer Tabu Ley Rochereau. With fantastic musicianship and harmonies that enthrall, La Rumba So Yo sounds like a street party you have to dance your way through. Bright horns, fantastic bass lines, amazing percussion, and melodies that linger for days La Rumba So Yo has it all.

Traveling around the globe and taking it all in is what Ricardo Lemvo & Makina Loca seem to be best at. They have an overwhelming desire to share this with us the listener and you can tell throughout La Rumba So Yo. It's enthusiastic energy, bright musicianship, and positivity is beyond admirable. While I have no idea what Ricardo Lemvo is singing about you get the feeling he and his band had a heck of time making this record no matter what the message or language. This is the sound of sunshine that takes salsa's moving rhythms and blends them with Angolan styles to produce inspirational results!
Posted by Paul POP! at 8:55 AM