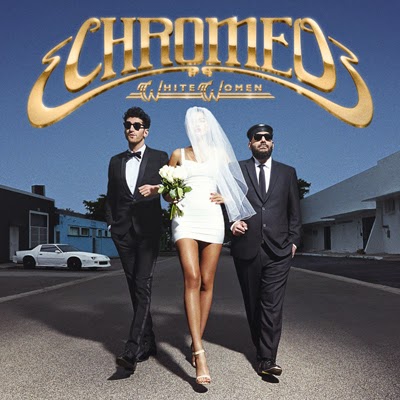 Four albums in and Chromeo are still finding ways to make 80's funk and soul all their own. Their latest album White Women is yet another notch in the band's growing repertoire and proves that there's still fantastic stuff to be mined from the 80's and brought bang up to date. And while they haven't necessarily branched out too much since their debut, they've pretty much perfected their sound to sharp shiny day-glo point.

White Women is an overwhelmingly fun album and it opens with, quite potentially, the song of the summer, "Jealous (I Ain't With It)." The song is so ridiculously catchy and so funky that even the most rhythmically inept person would find it difficult not to move to. From there the funk just keeps coming, snowballing into a giant mass that never lets up or slows down. While there are a couple of cliche moments throughout the album the vast majority of it is solid gold. Chromeo are beyond excellent songwriters and if you just sit and listen to the production on this record you can hear it; there's so much going on and so many layers of sound that it's almost impossible to keep up. The end result? A record that's in constant motion and passes the momentum on to you right between the ears. It's fantastic stuff that still has Chrmeo's wry sense of humor but also sees them branching out with a multitude of collaborators and extremely lush production.

While it's obvious throughout White Women that Chromeo have matured and they've polished their songwriting skills to an amazing level of clarity, the band hasn't lost any of it's enthusiasm. It could have been easy for Chromeo, they could have just coasted and rested on their laurels of albums past, but instead, they've written another strong album that's just as impressive as the first three. White Women is funky, silly, sexy, and superb. From the hilarious, "Sexy Socialite," to pulsating synthetic throb of, “Old 45s,” White Women never loses steam and is easily one of the best albums of 2014.
Posted by Paul POP! at 8:45 AM

Email ThisBlogThis!Share to TwitterShare to FacebookShare to Pinterest
Labels: chromeo