Snow In Mexico At Juno Beach 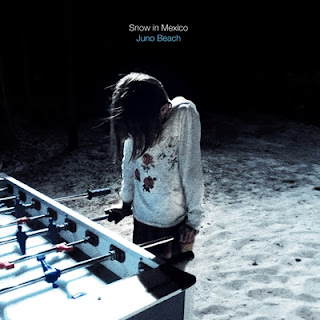 Juno Beach is the third release by the oddly named Snow In Mexico. This four song ep is a sexy detached and ethereal synth pop record that sounds as distant as the sun. With equal parts dreaminess and grooviness Snow In Mexico create a record that would seemingly appeal to both the indie and goth set. The rich, lush textures that wash over this record create this sparse dystopian world where the ghost of pop music roams free singing in whispers to anyone who will listen.

Juno Beach is a stupendously good single that doesn't waste a minute on anything frivolous or extravagant. Instead this record's bleak musicscape is filled with memorable moments and stands as monument to the brilliance that is the Roland Juno (hence the record's name). Juno Beach's ethereal synth washes along with the isolated vocals create a depth to the minimalism that appears throughout this record making the songs depressingly irresistible. I really like that Snow In Mexico so perfectly melds minimalism to synth pop and gets something that's cold and alone but still danceable it makes Snow In Mexico as rare an event as their name implies.
Posted by Paul POP! at 5:36 PM

Email ThisBlogThis!Share to TwitterShare to FacebookShare to Pinterest
Labels: snow in mexico