Blindness Suffers From A Lack Of Vision 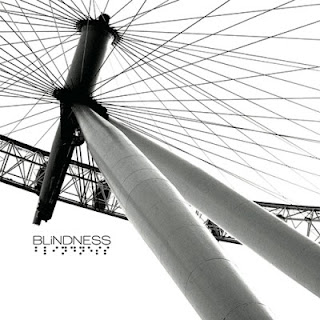 So the first thing that caught me about Blindness is that Debbie from Curve and Echobelly is in this band. That has to be a good thing right? I mean Debbie is a hell of a guitarist and has been on some of the best indie singles of the last 25 years, so how could Blindness disappoint? Unfortunately, their album Wrapped In Plastic is like a 90's alt-rock hangover.

Sounding something like a more angsty and mainstream PJ Harvey, Blindness seemingly feel uninspired and unexcited to be playing music. Wrapped In Plastic, unfortunately, is a bit boring. This is a record that seems to plod around with rehashed 90's alternative songs that for a power trio are lacking the power to propel them into the 21st century. The guitar work is fine for the most part but the songs just aren't strong enough to hold my attention. I wanted to like this record a lot, I tried to like this record a lot but there's just nothing here to get me excited. I've heard most of this record before 20 years ago and for all it's angst it just doesn't have the energy to compete in 2015.
Posted by Paul POP! at 6:39 PM

Email ThisBlogThis!Share to TwitterShare to FacebookShare to Pinterest
Labels: blindness