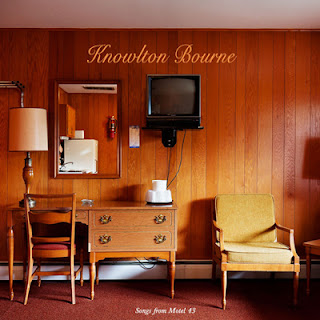 Mississippi born and bread Knowlton Bourne isn't your typical singer songwriter. Sure the guy sounds a bit country but he's definitely not as buried in the roots of the Deep South as being from Mississippi would seem to indicate. Oh no, Knowlton sounds more like his long lost brother is Richard Ashcroft and he's spent his whole life in Wigan as opposed to the US. His album Songs from Motel 43 is a soaring psychedelic trip through the cosmos in the back of a F-150.

Songs from Motel 43 is a fantastically airy record that lets Knowlton's vocal stylings sweep over the record like a great Condor coasting on a breeze. The record is vast and expansive and leaves his countrified influences in the dust for a more spacey intergalactic feel. The songs have their ups and downs and a few dirt road twists and turns but at times the whole thing seems rather heavenly and angelic. I'm not sure how Knowlton stumbled onto all this deep in the heart of Mississippi but it's pretty amazing that he did. Songs from Motel 43 is fragile, beautiful, and so much more than the sum of it's parts.

Bourne has taken heartbreak and isolation and painted a splendid picture of it that's as stark and intriguing as the album cover that graces Songs from Motel 43. I really didn't think I would like this record but it has totally won me over through it's Verve-ish vibes, sweeping songs, and sense of starkness. This is quite possibly the best record to come out of Mississippi in the last 20 years and as such should be in your collection.
Posted by Paul POP! at 5:02 PM