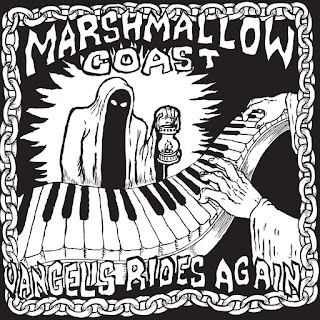 Despite the exceptionally cheesy cover art for Marshmallow Coast's new album, Vangelis Rides Again is really quite good. This former member (Andy Gonzales) of Of Montreal and Music Tapes has always brought some fantastic stuff to the indie pop table and this album is no different. And while the record looks like some sort of Scooby Doo rejected storyboard art, the music contained inside is pure lo-fi indie pop bliss.

Vangelis Rides Again sits somewhere between an easy-listening record, Fleetwood Mac, Of Montreal and a sad creepy pop record recorded in a basement. It's a fragile record that's loaded with hooks and melodies that while not overly produced or overly jolly does some significant ear worm damage anyway. As if to prove that point, the fact that Andy weaved, “On Broadway,” into an indie pop tune is simply something that has to be heard. It's probably my favorite moment of the record and it shows Marshmallow Coast to be adventurous and fun while sounding like he's broke indie pop down to it's respective elements. Other songs have this ambient and dreamy like texture to them that sound a bit 80's-ish as they wash over you. Just listen to the downtrodden synths of, “Forever,” and you'll hear it for yourself...it's almost depressingly cool.


Vangelis Rides Again is an intriguing little pop record that feels lo-fi, dreams of more, but knows it never will be. Slightly weird with a hint of sadness Vangelis Rides Again may not be the feel good hit of the summer or fall but it is pretty darn good and shows that Marshmallow Coast still knows how to write a decent record.
Posted by Paul POP! at 9:18 AM