The Dig for Midnight Flowers 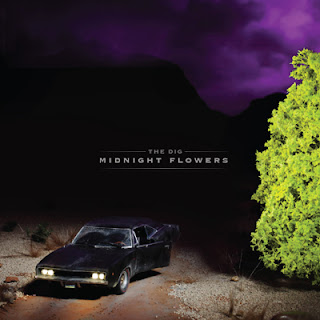 So, in my organized little world I usually have a bio/press release to go along with each CD I review. However, for The Dig, I somehow forgot to pull that information and set it aside and as a result I know next to nothing about this band except to say that they're quite good at what they do. Their new album Midnight Flowers is an atmospheric, angular, and dramatic pop record that's moody in all the best ways.

Utilizing enough pedals, textures, and tones to last a life lifetime The Dig swirl and mix riffs around your ears in a dizzying array of dynamics that sure to mesmerize. At times sounding like Editors and at others maybe a little bit like Interpol it has to be said that The Dig have the dark, disturbed pop thing down pat. And yet, despite all the atmospherics and moodiness the songs are still incredibly well put together, memorable, and sound poppy. They're clearly, very good at mixing the dark with the light and winding up with something grey and not grim.

Midnight Flowers is an excellent album whose mysteries and charms are obscured by grey. It's only after listening to this record several times that The Dig reveals its secrets. I really enjoyed this record, despite me not knowing a thing about them. Their ability to be moody and pop oriented is cool and their swirly sounds are hyptonizingly catchy. This is a record for a rainy day and as it's pouring outside right now, I'm totally digging The Dig.
Posted by Paul POP! at 2:34 PM

Email ThisBlogThis!Share to TwitterShare to FacebookShare to Pinterest
Labels: the dig