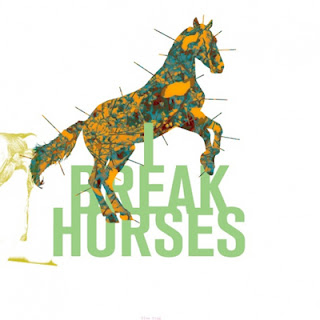 You know you've gotten old when the music that you listened to in your twenties is now the basis for every indie band on the planet. Who would have thought way back in 1992 that the shoegazing records I listened to would influence so many 20 something’s and the bands they’re in? It's amazing how they've convinced so many into picking up a guitar, a load of effects pedals and to completely idolize the scene that celebrated itself. Unsurprisingly, that's exactly what I Break Horses have done with their album Hearts.

Hearts is a post-shoegazing journey back through time with stops along all the major sites; My Bloody Valentine, Ride, Pale Saints and just about everyone in between. It's a very good record that's so in touch with its inner 90's you'd almost swear that it was 1993. They dreamily weave cascades of sound with guitars shifting, synths washing, drums driving, and vocals whispering. It's all very gauzy, very indulgent stuff and it's marvelous. These guys have so hit the nail on the head with their retro-futurism that it gave me Goosebumps. To think there are twelve songs of such indulgences is almost coronary inducing. Sure, anyone can plug in a bunch of pedals and make a lot of racket but only a few can make something memorable and that's just what I Break Horses have done here.

In a day and age where everyone has a sustain pedal and calls themselves dream pop only few succeed in actually making it. I Break Horses is one such band. Hearts is an album firmly rooted in the past but optimistic enough about the future to push things forward. They’re songs are spectacular, their musicianship top notch, and they may break horses but they'll probably break your heart. Hearts is an essential release for anyone who has caught themselves staring down at their shoes in a wash of noise and getting lost within it all.
Posted by Paul POP! at 2:34 PM

Email ThisBlogThis!Share to TwitterShare to FacebookShare to Pinterest
Labels: i break horses