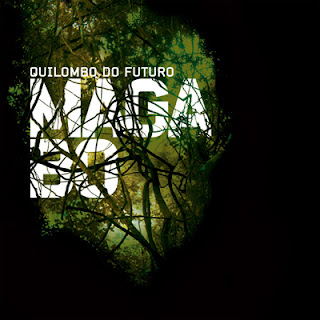 Maga Bo's Quilobo Do Futuro is a journey into the deep dark recesses of afro-Brazilian music that fuses the modern with the old and ragga with samba. It's a rhythmic tour de force that doesn't stop moving during its entire thirty eight minute duration and is the sort of thing that will leave you fascinated. There is all sorts of tribal drums, call and response vocals, Latin tinged vibes, simplistic arrangements and just about everything else under the Brazilian sun. Quilobo Do Futuro is a fascinating listen that keeps you gripped with its cultural study of all things afro-Brazilian.

Working with celebrated musicians, BNegao, Gaspar, Lucas Santtana as well as up and comers like Funkero, Maga Bo was able to mix and match sounds, time periods, and ideas to come up with this fascinating fusion of musical influences. In the span of twelve songs Maga Bo creates an afro-Brazilian village of musical open mindedness. It's really cool stuff to just sit and listen to the cultural significance of all this coming together and revel in its beauty.

Named after an autonomous fugitive settlement founded by ex-slaves and others in colonial Brazil, the Quilobo Do Futuro is a gorgeous statement of global cultural resistance. Created and fortified by a international community of musicians the record is proof that music is a global uniting phenomenon and sounds from wherever can unite to tell the tales of it's people no matter what stands in it's way. Maga Bo has brought this ideal to his music and it pulsates through the tribal and primitive rhythms that make up Quilobo Do Futuro . Listen to it and open your mind.
Posted by Paul POP! at 7:41 AM