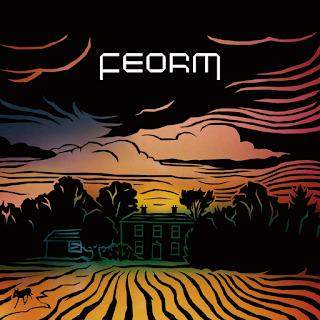 Feorm's self-titled album is an expansive textural landscape that seems to go on forever in all directions at once. An instrumental album that teeters somewhere between post rock and ambient soundscapes, the record sculpts its own vistas and views with the use of guitars, windswept synths and a surprising degree of grooviness.

Sure, this thing is predominantly ambient but the record still manages to find a degree of catchiness to it. At times sounding like mechanical wonkiness set to a backbeat Feorm's music kind of tinkers with the idea of machines, grooves, and a tad bit of pop sensibility. Expanses are still wide and open but they have this nature to them that while they're being laid out it's as if the band was driving crazily through them. The whole thing is intriguing and musically fascinating as the band so easily and readily switches from washed out sounds to desert grooves and everything between. This is the sort of record that musicians sit down to study and listeners lose their minds in. It's fun stuff that isn't terribly complex it's just texturally brilliant and gargantuan in scope.

Feorm is a cool post rock/ambient band that throws the conventions of those genres out the window and creates their own path. They fear nothing and carve out their own existence creatively. Their self-titled album is an expansive journey through plateaus, dreams, and valleys somewhere deep into your mind. It's a contemplative and adventuresome record that's fun to just sit and drift away to...and that's a pretty good recommendation if I do say so myself.
Posted by Paul POP! at 2:38 PM

Email ThisBlogThis!Share to TwitterShare to FacebookShare to Pinterest
Labels: feorm