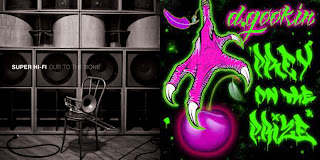 It's always interesting to hear how reggae and dub have come to influence pop music. It's fascinating how a sound that originated in the Caribbean has propagated itself far and wide and wound up in all kinds of music. Two groups that prove this point are Super Hi-fi and D. Gookin. These two groups/artists are as seemingly unlikely to be influenced by reggae and dub as one can be but yet here they are will the Irie in full force.

Super Hi-Fi are a bunch of Brooklynites that dress in three piece suits live in a major metropolitan area and still manage to create some of the coolest dubbed out tunes I've ever heard. To say the soul of Lee 'Scratch' Perry possesses these guys would be an understatement as this stuff sounds so authentic it's hard to believe they're not stranded on an island somewhere. With enough analog sounds, horns, deep basslines and chilled out vibes their album Dub To The Bone is a trip back to when all this sounded new. Some of the songs go deep and get lost in a symphonic instrumental exploration of the art form. It's awesome stuff that illustrates that the genre is alive and well in unlikely locations.

On the other end of the spectrum is D. Gookin creates more electronic based reggae and dubbed out digitalism. His EP Prey On The Prize contains huge pop hooks and doesn't go easy on the electronics and the whole thing sounds like a rush of pure sugar cane. Melodies soar, grooves skip along and the whole thing sounds like the one love idea bathed in sunshine. It's a fun, lighthearted record that at times is rough and ready but always melodic. Prey On The Prize is a great record of modern reggae that's glossy, glitzy, and very well produced.

Two ends of the spectrum one mutual love. Both Super Hi-Fi and D. Gookin have the reggae/dub vibes coursing through them and both records are brilliant listens in their own right. Whether it's electronic and modern or analog and traditional both Prey On The Prize and Dub To The Bone have you covered. These are the perfect records for the dead of winter as they're like rays of sunshine that reminds us Spring and Summer are just around the corner.
Posted by Paul POP! at 5:11 AM