The Garifuna Collective Carry On 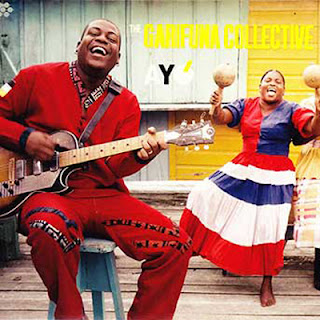 The Garifuna Collective are a group from Central America who create music that reflect the culture of the Afro-Amerindian Garifuna community. Their album Ayo is filled with hints of African and Caribbean influences throughout and despite being from Central America this collective has more in common with those influences then their geographical location would lead you to believe. Ayo is an intriguing record simply because of that struggle between location and influence and the songs reflect that constant conflict in a positive light.

Having lost the band's leader suddenly soon after their debut album the band was left without a direction. And while the easy thing would have been to just stop being a collective, the group picked up the pieces and emotions and channeled it all into a new album he would be proud of. Ayo is a soul stirring record steeped in in tradition but thoroughly modern in it's approach and creation. The record has plenty of authenticity and sounds but still finds time to occasionally be funky or groovy. Those occasional glimpses into the bands energy and emotions really give Ayo a sense of freedom that would undoubtedly make their former leader proud.

Steeped with history, tradition, and emotion The Garifuna Collective have found a way to take it all in and craft something beautiful. Ayo is a great record of laid back grooves, traditional sounds and a bit of funk for good measure. They may have lost their spiritual leader but The Garifuna Collective are in good hands here and Ayo is well worth a listen.
Posted by Paul POP! at 4:19 PM