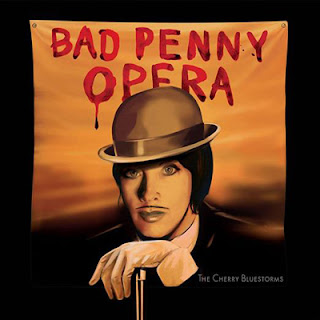 I have to admit, Cherry Bluestorms didn't make an impressive first impression with me when I received their album, Bad Penny Opera. I mean look at that cover. It's horrible. It ranks up there with Cancer's To The Gory End as worst album covers ever. So with that image securely tucked away in my brain this band already had one strike against them.

Musically, they kind of swung and missed as well. While not completely folky, the band have this sort of slightly theatrical version of folk music that's not amazing, but not too bad either. What's weird about all this is that the first track on the album, “Bad Penny Overture,” is an impressive instrumental set up. Unfortunately, the album falls off a cliff soon after. Bad Penny Opera is a middle of the road kind of thing that's pretty mediocre. It' just of kind of plods along with an almost singer songwriter feel about it. I want to say that this is loosely some sort of concept album, but I wouldn't guarantee that.

Anyway, despite it's overwhelming sense of just existing there are a few good moments on this record. “Wear Your Love Like Heaven,” is a stomping, horn laden pop tune that's a thrilling rush in a sea of mediocrity. Bad Penny Opera clearly has potential and is on the cusp of something better it just never gets there. The Cherry Bluestorms have great tunes within them, they just struggle to set them free. Hopefully, they can let this Bad Penny Opera go and crank out a true opus.
Posted by Paul POP! at 9:35 AM