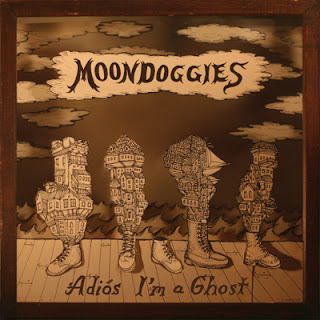 Adios I'm A Ghost, the third album by northwestern band The Moondoggies and it sees them continuing to explore the territory between Midwest and Deep South while remaining firmly in place up north. Adios I'm A Ghost is essentially west coast pop meeting the deep south in a rock and roll dust up. It's a record that easily switches between rock and roll and pastoral pop and leaves your ears in awe. This is a dusty countrified rock record that's laden with twangy hooks and huge melodies and comes with a sense of drama throughout. The record is expansive and rustic and blends the woodsiness of the Pacific Northwest with the homelike emotions of the Deep South with endearing results .

Adios I'm A Ghost comes off sounding like Chris Isaac in a gang fight with Kings of Leon, Mazzy Star, and The Tyde. The songs are dramatic and sweeping but intimate, rustic and rural. They're plodding but in a beautiful way and will bring to mind long winding roads and breezy drives through forgotten towns. It's all a bit swoonsome and romantic in a yearning for something comfortable kind of way. Adios I'm A Ghost is a great listen and quite a stirring effort. It's power lies in it's subtlety and swoony melodies and how it manipulates you into falling for it. It might not pop you on the top of the head with a hook, but the hooks do find a way into your subconscious and never find a way out; surely a sign of a good record and why you'll love being haunted by these ghosts.
Posted by Paul POP! at 10:07 AM

Email ThisBlogThis!Share to TwitterShare to FacebookShare to Pinterest
Labels: moondoggies