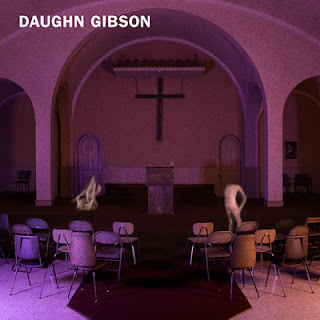 Holy surprises Batman! I must admit that I didn't give Daughn Gibson's Me Moan record a chance at all. The cover just wasn't interesting at all but then I took the time to actually listen to the record! It was so surprising it grabbed me by the ears with it's countrified dusty take on the Sisters of Mercy. Call it cow-punk goth, Gothic Americana or just strangely dark pop it's the sort of record that captivates and pushes the boundaries of everything you think you know about.

With deep tenor vocals that haunt each song like a ghost from beyond the whole thing sounds like it's enveloped in fog in a graveyard. If you add in sweeping atmospherics to the whole graveyard thing Me Moan becomes this chilling and stirring record that's bizarrely hypnotizing...like Dracula's eyes. The songs for the most part are dark but do stumble upon a strange pop sensibility now and again that makes this decidedly weird record quite listenable

Different in every sense of the word, Me Moan is probably the strangest record that will come across my desk that I'll want to listen to many times. Not weird for the sake of being weird, Me Moan sounds this way simply because of Daughn Gibson and his unique voice. Dark days and even darker nights have never sounded so spookily entertaining.
Posted by Paul POP! at 4:17 PM